Posted by Sobek13 on December 30, 2019
Posted in: Uncategorized. Leave a comment

The holiday season is the season of giving, and the Crocodile Research Coalition (CRC) threw in some jolly crocin’ spirit into the season of candy canes, Christmas stockings, and Mariah Carey resurrecting from the abyss (look up this pop culture reference, it will definitely give you a laugh).

in Hopkins and St. Matthews in Pomona to bring the Crocmas spirit to students. Given “tis the season of peace on earth and goodwill to all”, CRC stressed the Do’s and Don’ts coexisting with crocs and how to be proper stewards of the Earth. From there, we got on our sleigh (aka, the CRC truck) and headed to Punta Gorda to conduct a nocturnal eyeshine survey of Moho River as part of our American Crocodile countrywide population survey. We saw a few red lights along the river’s edge- no it wasn’t Rudolph but the reflection of the tapetum lucidum in the crocodile’s eyes. Our adventures in Toledo District ended with a visit at the Oceana Eco-Club in Punta Gorda. Here we continued the discussion of coexisting with crocodiles, how to prevent human-wildlife conflict, and what we can do to be environmental leaders.

The gift of knowledge continued as we celebrated the 27 Days of Crocmas! As of Dec 2018, the IUCN/SSC-Crocodile Specialist Group recognizes 27 crocodilian species. For the 2nd year in a row we shared on our social media some of the wonderful species of crocodilians in the world, for example:

On the 14th Day of Crocmas, the CRC brings to thee… Caiman yacare. This species create mound nests, which consists of a clutch size typically between 22-35 eggs, with a maximum of 42 eggs. It’s possible that habitat type could influence clutch size.

Thank you to friend Pablo Siroski for providing the photo. Pablo is part of the Proyecto Yacaré Santa Fe Argentina team, established in 1990 in Santa Fe, Argentina. Proyecto Yacare conducts various conservation research within the wetlands of Santa Fe, Province.

Head to our Facebook Album 27 Days of Crocmas to learn more!

And then… twas’ a few days before Christmas when all through the swamp, not a creature was stirring, not even a croc! Santa visited the CRC well before Christmas this year, in addition to over the $4000BZ donated to the CRC in response to a Christmas Wish List, we received ~$24,000BZ from CrocFest for our American crocodile satellite tracker program (https://crocodileresearchcoalition.org/keeping-track/), in addition to the

generous support and donation by St. Augustine Alligator Farm Zoological Park for 2 more satellite trackers. The CRC is currently working on building a satellite tracker program focusing on the American crocodile. The American crocodile is currently listed as Critically Endangered in Belize as it’s prime habitat (the cayes and the coast) is being rapidly developed for tourism. With the satellite trackers, the CRC hopes to learn how the crocodiles move among habitat, identifying key habitat and working with local and national government to conserve habitat to ensure the survival of this species. Additionally, by understanding the crocodile’s dispersal patterns, the CRC can better inform communities when crocodiles may be on the move in urban areas in order to prevent conflict (such research was done in Australia and decreased human-crocodile conflict significantly). Although conflict between human and crocs in southern Belize is practically zero, and very rare in the rest of the country, the CRC anticipates that our research can continue to mitigate conflict as the human population grows and as we help the American crocodile population to stabilize.

Besides the gifts, people believe this is the season of miracles, and thanks to your good thoughts we have some wonderful updates about our Croc Ambassadors and crocs under rehab:

Luke, Morelet’s Croc:  The Force is with Luke! During the last vet check-up last week his tail showed signs of healing from the deep laceration wound (see previous post in this album). To prevent the wound from getting wet, Dr Philip from Animal Medical Centre and the team at The Belize Zoo got creative and attached two water bottles to keep this part of the tail afloat and as dry as possible when Luke enters his pool. A very clever solution when particular equipment may not be readily available.

Jonathan, Morelet’s croc:  Jonathan a Morelet’s croc was found emaciated and lethargicin Corozal.  With a team ofcommunity members and newest member of the CRC team Jonathan Triminio, they were able to capture this croc and transfer it to the zoo. Jonathan is currently getting veterinary treatment prior to coming south to the CRC. So far so good!

Faceless Men, Morelet’s croc:  While driving to Belize City, a Good Samaritan saw something unbelievable! A 4ft crocodile jumping out of the back of the truck!  The Good Samaritan pulled on the side of the road and took this crocodile in, driving it to The Belize Zoo. Here, this little guy is getting treatment for his head as he hit the ground hard and has some lesions.  Crossing fingers, this little guy will get the thumbs up by the vets and can finish his rehab with us.

Aemon: Aemon gave our Executive Director the best gift – listening to commands and completely coming out of the water.  Aemon is really coming out of his shell and will soon fill in Rick’s role as a wonderful ambassador about the magnificent world of crocodiles!

Sam&Gilly… and Mad Max of course!:  Gilly and Sam are slimming down and should be ready for transport down south to the CRC from their current home near The Belize Zoo.  Mad Max is still being crazy as usual.

So our 2019 ended in good cheer and we hope it has given the CRC head start on Santa’s GOOD list for next year, so HAPPY NEW YEAR TO ALL, AND TO ALL A GOOD NIGHT! 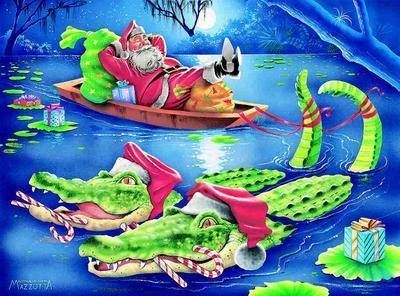